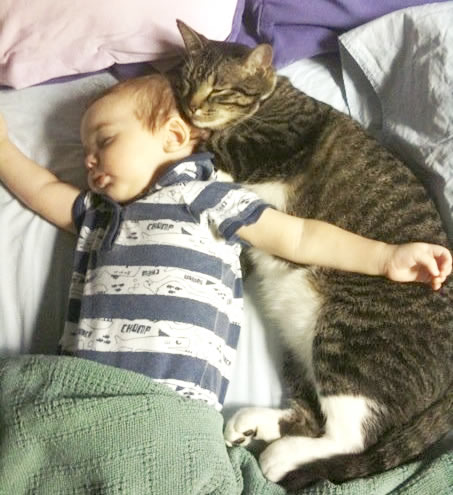 Ozzi Cat attends a welfare seminar on “People and pets – their behaviour and emotions“, which is organised by Lort Smith Animal Hospital and Animal Welfare Science Centre.

(On photo: “Baby Finny and cat Zippy who are the best buds. The cat has been fascinated with Finny forever, and loves laying next to him as often as possible.” © Scott Granneman)

I’m thrilled to attend the seminar on animal welfare that is organised by Lort Smith Animal Hospital and the Animal Welfare Science Centre. It’s a half-day event that will cover the latest research and thoughts on the welfare of companion animals.

I’m thrilled because being among the best people who care for pets is something I treasure. Together we make this world moving. The seminar will include talks about dogs and cats. As a person who understands psychology and who is heavily involved into human interaction and experience design, I’m glad for any opportunity that comes my way that relates to human-pets relationships.

One of the cat talks will be “Food for thought: what motivates people to feed stray cats?” by Miranda Coffey. It will be interesting to hear her thoughts and research results. The speakers on the day are:

Robert Holmes -
A Member and Fellow (Animal Behaviour) of the Australian College of Veterinary Scientists. He is the owner and operator of the Melbourne-based Animal Behaviour Clinics and regularly consults in Adelaide and Sydney. Dr Holmes also provides a telephone consulting service to veterinarians and clients throughout Australia and in Hong Kong, Kuala Lumpur, New Zealand.

Sally Haynes -
Undertaking a PhD through the Animal Welfare Science Centre at the University of Melbourne, studying human-canine relationships in animal shelters. Sally delivers lectures on dog and cat behaviour/welfare, assists in a variety of research projects.

Miranda Coffey -
A veterinarian who has experience working in private emergency practice and in a large animal welfare organisation. It was during her time working as a shelter vet that she developed a strong interest in the welfare of stray cats. She has recently completed a Master of Animal Science where she undertook a project on semi-owned cats through the Animal Welfare Science Centre at the University of Melbourne. She currently works as a Project Officer at the Bureau of Animal Welfare, DEPI.

Dennis Wormald -
Has a Bachelor’s degree in Biomedical Science from Melbourne University, followed by an honours research year in behavioural neuroscience, before completing Veterinary Science at Melbourne in 2010. He then practised as a veterinarian for two years. Having a passion for veterinary behaviour, he returned to the Animal Welfare Science Centre at the University of Melbourne to undertake a PhD.

Liz Walker -
Graduated as a veterinarian from Melbourne University in 1989. She began her career as a vet in private small animal practice before moving into research (in sheep parasitology) and teaching. In 1995 she entered the corporate world with Uncle Ben’s (now Mars Petcare) and then Bayer Animal Health where she held positions in sales and marketing while completing a Masters of Management at MGSM. She was appointed General Manager of Gribbles Veterinary Pathology in 2004 and became CEO of Lort Smith in June 2010.

Wonderful people! I’m honoured to meet them and be among them on the day.