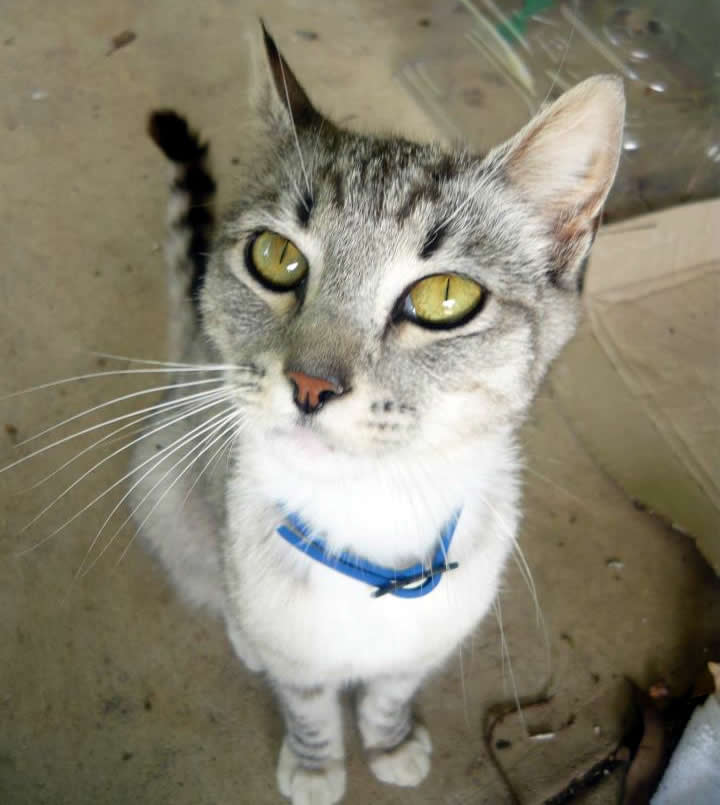 Meet a magical rural cat Sabrina. This lovely story was shared by Laura Gartlan who says, and I think you will agree, “All cats deserve a home“.

This is Sabrina. And here is her story from the beginning.

I lived in Mooroopna, a kind of rural area in Australia. I lived in a Crescent and the weather was always hot. I would spend time out on the front step of the house.

I had not been there long when a gorgeous Egyptian Mau looking cat, caught my attention. It was Sabrina’s mother. I patted her when she was convinced I was good. I saw she had a collar so I could not just take her, she looked fed and her coat was good. She was a sweet heart but sadly, she seemed to of vanished.

Some time later a small young cat came around. I knew she must of come from the cat I had previously saw now and then. I thought at first she was fine and didn’t need any help, I thought she was owned and cared for. 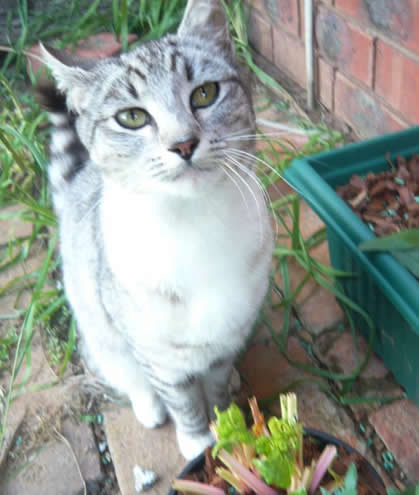 Slowly she got ill and stayed small. I then gave her food but she would not eat till I was out of sight. It took a month before I could stand near her while she ate, then a couple of weeks to come close to her, then she went off one day and I thought that must of been it, sadly.

A while later, this gorgeous girl came back and she was friendly, I could hold her and play games, I could check her ears and eyes for problems. I decided I would feed her and have the vet see her despite being unemployed.

She was pregnant and they couldn’t abort. For a while she was my shadow as I gardened and she would talk and she would pose for photos, she would eat my well growing veggies. 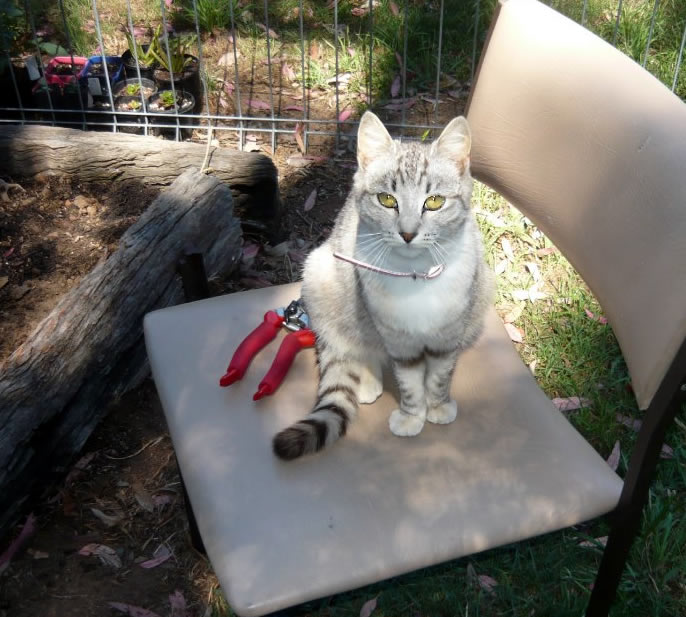 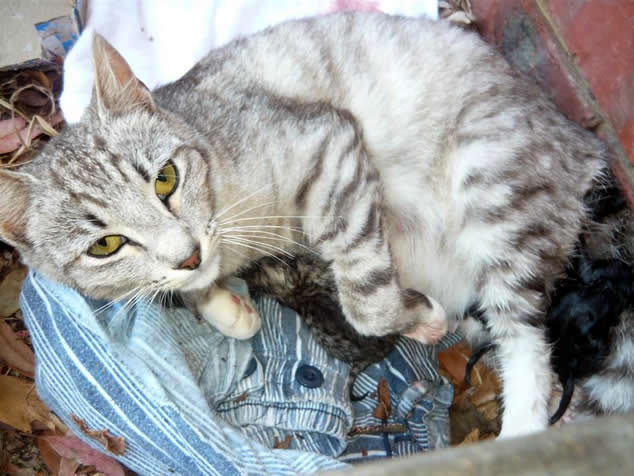 Cat Sabrina with her kittens

One of those was born first and one of those, last. I helped her stay comfy, clean and safe while she gave birth. It was the first birth of anything I’d seen for my self. It was so yucky but amazing.

Sadly there were kids in the neighbourhood who caused us much trouble, that very night a tennis ball was in Sabrina’s food bowl, she moved her self and her litter into the ivy bush thing. 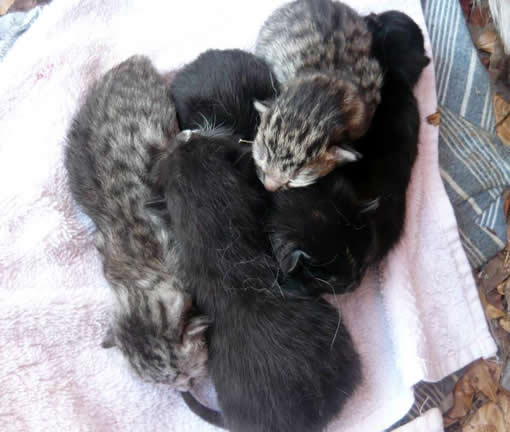 These were Sabrina's sweet babies. R.I.P to all but Tigress

The next day, kids were there claiming to only be retrieving the football they’d kicked there. (I say claim because these very kids were caught as they were about to smash our front window in with a bat for the second time. I say claim, because these kids were observed throwing stones at the native pigeons, I say claim because these kids constantly climbed into our backyard, littered their rubbish including illegal fire cracker thingies and so on and so forth with the kids who never left our property alone so much that I became for some time, like a guard dog, always paranoid and ready to leap out at them and talk to their mother, who essentially tried but you could see she was struggling to control them for self)

A little while later, less and less numbers of kittens made it. She had one left and I was moving homes. I was not allowed to take her as I had Alucard and Dahlia, two other cats. I knew I had to find her a forever home. 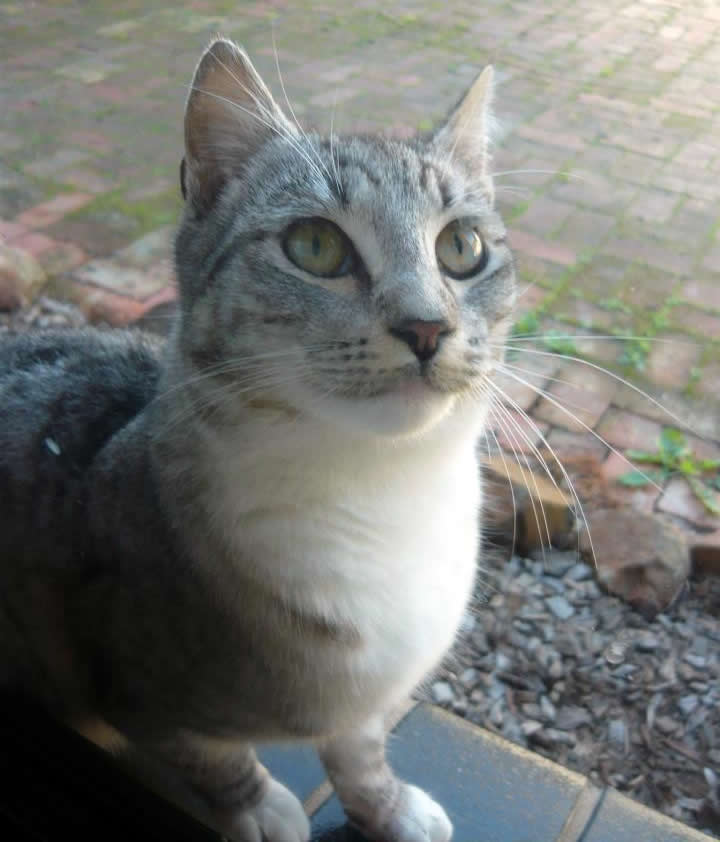 My mum came and fell in love with her and Sabrina was then adopted by my mother and desexed.

She now lives a healthy life indoors, she surprised as all at how well she got along with the other cats and using the litter tray. Mum says she talks a lot and is the sweetest little thing ever.

I’m glad that I decided back then, to feed her. All cats deserve a home, not all cats get one or one that is worthy of the cat. But this gorgeous shadow of a cat, had found hers at last. And Tigress, her remaining kitten, also found her forever home.

Sabrina is special to me because I think she came into our lives for a reason, she kept me company gardening and she captivated my mum’s heart and has a forever special place in both our hearts now.

I named her Sabrina, once I was able to pat her when she was being fed because she is truly a good soul and Magical! 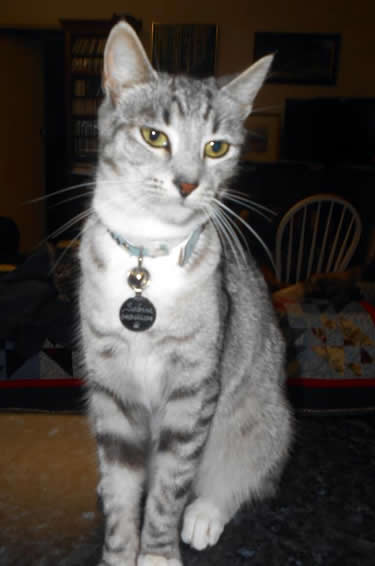 Read about two other cats, Alucard and Dahlia, who Laura loves very much, in the Ozzi Cat Magazine Issue #2.

Tell About Your Cat

How did you meet your cat? Did he or she found you? Is it a rescue cat? Share your lovely and a special cat story with cat people.