Miracle Re-Uniting: Woman Recognised Her Injured UK Cat on Facebook by Accident While Travelling in Australia 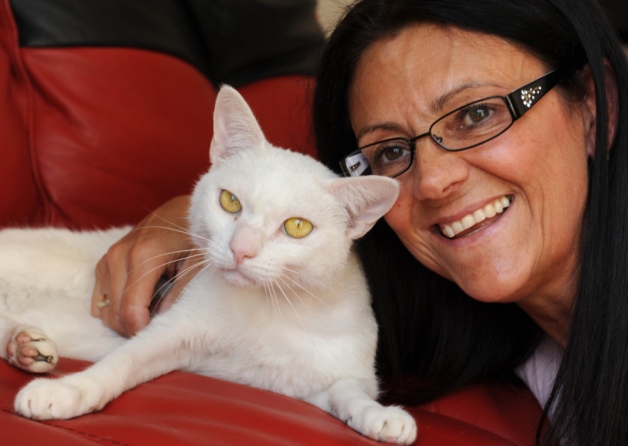 A woman travelling in Australia accidentally found out about her cat left to die on a road in UK. Her friend and a post shared on a vet clinic’s Facebook page helped with a miracle re-uniting.

Suzanne Costin and her husband Malcolm travelled to Australia to visit her son.

One day she received a call from her friend Claire who remembered that Susan had four cats, including a white one.

The cat’s picture was posted on the Arun Veterinary Group’s Facebook page.

5-year-old white cat Milo was found in Ashington, UK, by a passerby near Costin’s home.

“A person passing thought that he was a sandbag but on closer inspection realised he was a cat and brought him into the surgery out of hours. The cat didn’t have a microchip or collar so the nurses posted pictures of him on Facebook which were viewed by over 2000 people.” – said Julie Fourcade from Arun Veterinary Group, Pulborough.

Suzanne drove to find a WiFi connection and finally saw the picture of her cat. She called her son Jake, who confirmed that Milo had been missing for a day.

Suzanne believes that the cat was hit by a car and left to die.

Milo’s nose, head, leg were injured. The tale was not functional. The cat was on a tube feeding as he could not move his face.

“He would have died if he hadn’t been found,” said Suzanne.

Suzanne’s son said that the cat’s condition was poor. The family decided not to make any decisions until they return home.

For a week the Arun Veterinary Group had been caring for Milo’s health. Later the cat was allowed to go home.

Susan said Milo had made a big recovery. “He’s eating normally now and has regained his full strength. We’re so grateful to the vets, the man who found him and my friend Claire.”